It’s Funny Being a Parent

Posted on September 1, 2015 Categories: Uncategorized No comments yet

“We bring our children into the world and can’t imagine a day without them. And then we learn it’s about letting go a little more each day. And the goodbyes become more significant.” 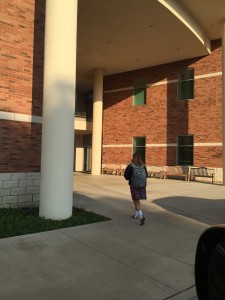 Of course I know the definition of “funny.” I question myself again, why am I using this word to describe parenting? There must be a nobler word – challenging, demanding, exciting, scary, new, eventful, stressful, interesting, inspiring, stimulating, puzzling, amusing, enjoyable, great?

I conveniently type in “funny” on my I-phone nearby to confirm the meaning of funny.

I realize the word “funny” dead-on describes parenting. Parenting is difficult to explain or understand, while humorous quite often.

I can’t recall as a child thinking about being a parent, how many children I wanted or if I wanted children for sure. I believe I assumed I’d marry and have children, but I’m not sure I gave it much consideration. When my husband and I decided to try to have children, we didn’t have a problem. I became pregnant immediately. And the worrying began as fast as the pregnancy test screamed “yes.” Would he or she be okay? Would he or she be healthy? Are we ready to be parents? What can I eat? Can I exercise? Can I travel for work? What if the air bags deploy while I’m driving?

Despite some early nausea, I had an uneventful pregnancy. Our son, Jeffrey, was born at 6:36am on January 5, 1999. The minute I held him in my arms, emotions of fear ran through my entire body. I didn’t doubt that I could care for him physically, but how would I care for him emotionally? What if he gets hurt? What if he’s sick? What if he’s not healthy? What if he dies? Endless questions ran through my head. I even convinced myself at one point in the hospital that he was switched in the nursery. I confided in my sister – “he had a little something on his face, like a pimple, earlier in the morning, and then when they brought him back from the nursery it was gone. What if this is the wrong baby?” My sister hesitated for a moment, as I know she knew what I was referring to, but then calmly said – “stop – you aren’t going to enjoy him if you worry all the time.”

Two years later on January 31, 2001, Gracie, our second child entered the world. She is the one who attended her first day of high school today. Another blessing came on November 5, 2002 with the birth of our third child, a daughter named Emma.

We are a family of five. However, we live near our extended family. And when I say near, I mean close. We reside within a four-mile radius of my four siblings and their families, my niece and her family, my parents and my in-laws. My brother in-law and his wife are “outside the zone” – about seven miles away. My children love spending time with their grandparents, aunts, uncles, and cousins. They don’t know any different. I didn’t grow up in the same city with my grandparents and cousins. Two of my grandparents died when I was very young. I hardly remember them. And while I know my children appreciate their grandparents, one day they will really “get it” – how lucky they’ve been to have four healthy grandparents involved in their daily lives.

With the background above, I hope it sheds light on where I stand today as a parent and why I’m writing this essay. I don’t parent like my mom. My mom is more organized than Martha Stewart. She has a specific place for every kitchen utensil, never leaves clothes in the washer past the buzzer, and as a child I had a bedtime. In my home today, knives, spoons and forks go in one drawer, but it’s a crapshoot to find other utensils. I’ve found myself re-washing clothes that smell after sitting in the washer for days, and my kids stay up really late.

But do those details matter? It’s not about whether your child’s shirt is ironed or your house is always clean that makes a home. It’s about being there for your children, listening to them, and loving them. I never questioned my parents’ love for me. I pray my children don’t question the love I have for them. A love that hurts deeply at times. Because all the fears I had about parenting when I held my son in my arms the first time came true. I’ve learned my children will get hurt, they will not always be healthy, they will screw up, they will make mistakes, they will fail, they will lose, they will cry, they will have bad days, they won’t always treat others with respect, and they will disappoint. But I’ll still love them through it all. And they also love me back like no one else, they help others in need, they recover from illnesses, they succeed, they smile, they win, they have good days, and they say “thank you.”

It takes years to learn, but I finally accepted that my children are a blessing and a gift from God but not mine. And while I spent almost every waking minute with them as babies and toddlers, I began to let go that first day of pre-school. But only for a few hours. Then play dates entered into the routine, and I even let another parent drive my child for the first time. And then came the sleep overs at a friend’s house. Before I knew it, they were in school all day. And I now discovered that they are away from home more hours than they are home awake.

And then came the big realization. I’ll one day let them go for good. They’ll leave home. I pray they’ll come back and visit and maybe even make their home nearby, but I don’t know.

That bolt of lighting struck me today as I drove away from Ursuline Academy after Gracie exited my car for her first day of high school. I will see her later this afternoon. She may be happy or mad. One never knows with a teenage girl. She’ll ask what’s for dinner? I’ll respond – I’m not sure. She’ll either love her teachers or complain. She’ll most likely not be excited about homework. And she probably won’t appreciate the friendships she began making today until she can’t bear to say goodbye in four years; or when she’s in her forties sitting on the couch with one of her high school friends comforting each other during a tough time. And maybe even one day she will drop her daughter off at the same school and realize being a parent is “funny.”

Parenting is difficult to explain or understand while humorous quite often.

And she may find herself struggling with “letting go.” And ask – how did I bring this child into the world, love he or she with all my heart and as each day passes I’m slowly letting go.

I’ve concluded funny is the precise word to describe parenting. Without humor, parenting would be painful. And parenting is difficult to explain. We get up every day and I believe the majority of us try our best to be good parents. We reflect back and know we screwed up some days, but we thought we were making the best decision at that time. And we slowly let go and realize that every goodbye becomes more significant. 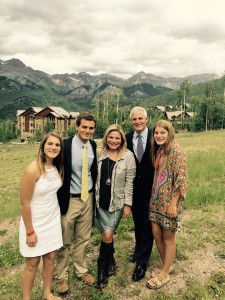